Interpreting in interrogations and in court:  Experimental insights

Increasingly, interpreting in police interviews and in court is conducted via video or phone, typically in the consecutive mode, while interpreters take notes due to memory demands.  Yet the role of visual attention in interpreting is unclear.  Effects of interpreter presence, mode and language were tested in a live simulated police-suspect interview repeated with 103 trained interpreters.  Multiple performance criteria were assessed in a mixed 3 (Presence: in-person, video, phone) x 3 (Language: Spanish, Mandarin, Arabic) x 2 (Mode: consecutive, simultaneous) design.  Overall performance and pace replication was unaffected by language, but was significantly better face-to-face and via videolink than phone.  Eye tracking technology confirmed a dominant focus on the interviewer.  Pupil dilation and blink rates showed greater cognitive load during consecutive than simultaneous interpreting and over time.  Visual attention correlated best with accuracy.  Reduced cognitive load and increased visual attention contributed independently to interpreting reliability.  Simultaneous interpreting was most reliable; consecutive and telephone interpreting more prone to error.

Jane Goodman-Delahunty, BA, TTHD, JD, PhD, is a Research Professor at Charles Sturt University.  Her empirical legal studies foster evidence-based decisions to promote social, procedural and distributive justice within organisations and the community.  Her career exemplifies evidence-based transdisciplinary applied practice.  Trained in law and cognitive experimental psychology, she has conducted original research on interviewing techniques to elicit reliable and accurate information from terrorists and other high value detainees, and on interpreted evidence in legal proceedings.  She is a member of the bar, a registered psychologist, an accredited mediator and an elected Fellow of the American Psychological Association.  Formerly, she was a Commissioner of the New South Wales Law Reform Commission in Australia, and an Administrative Judge of the US Equal Employment Opportunity Commission and is currently a General Member of the New South Wales Civil and Administrative Tribunal.  Her research has been funded by the US High Value Detainee Interrogation Group, the National Science Foundation and the Australian Research Council.  She has authored over 200 books and scholarly articles and has been appointed an expert witness in civil and criminal cases in the USA and Australia. 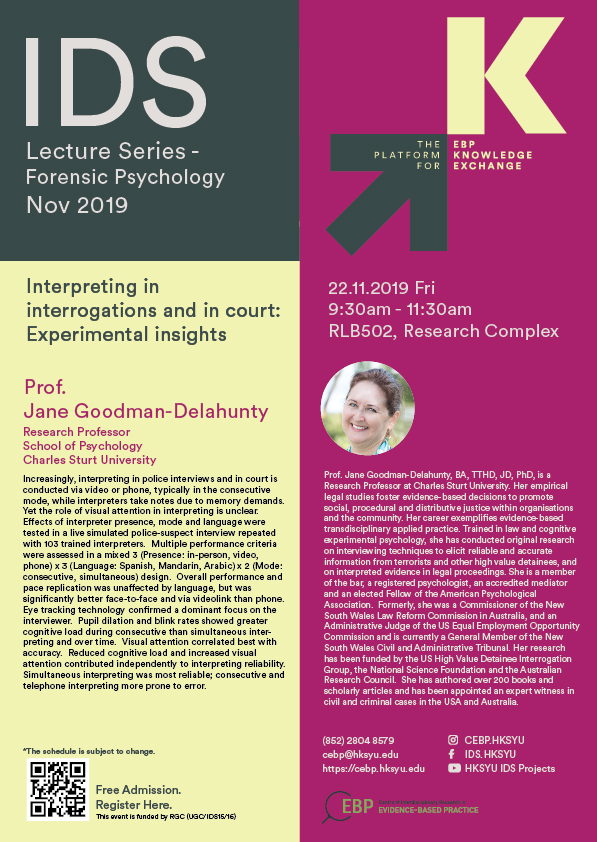