This lecture covers the joint work with Jack Knetsch and Richard Thaler (2017 Nobel Laureate) and others on the experimental studies of endowment effect and Vickrey auction. We have explored various experimental designs of different length and settings. Repeated trials, no matter few or many rounds, cannot eliminate the endowment effect. Group size issue needs further exploration.

TANG Fang-Fang is Professor of Economics, Finance and Marketing at National School of Development & BiMBA in Peking University, since 2008. He obtained his PhD from Doctoral Program in Quantitative Economics and Informatics, jointly by Universities of Bonn-London School of Economics-Louvain-Paris-Tel Aviv, in 1996, under the supervision of Professor Reinhard Selten, 1994 Nobel Laureate in Economics. He obtained his Master degree in Engineering from Shanghai Jiao Tong University (1988) and his BSc in Applied Mathematics from Chengdu University in Science and Technology (1985). He held various positions in the Hebrew University of Jerusalem, National University of Singapore, Nanyang Technological University and Chinese University of Hong Kong. In 1997, he was awarded the Heinz Sauermann Prize (biennially by the Society of Experimental Economics). Dr. Tang is one of the “Most Cited Chinese Researchers”, ranked by Elsevier, in the category of “Business, Management and Accounting”, from the beginning year 2014 to 2017. His research has extended from game theory and experimental economics to carbon finance and Fintech. He serves as an adviser to various companies including Blockchain start-ups. 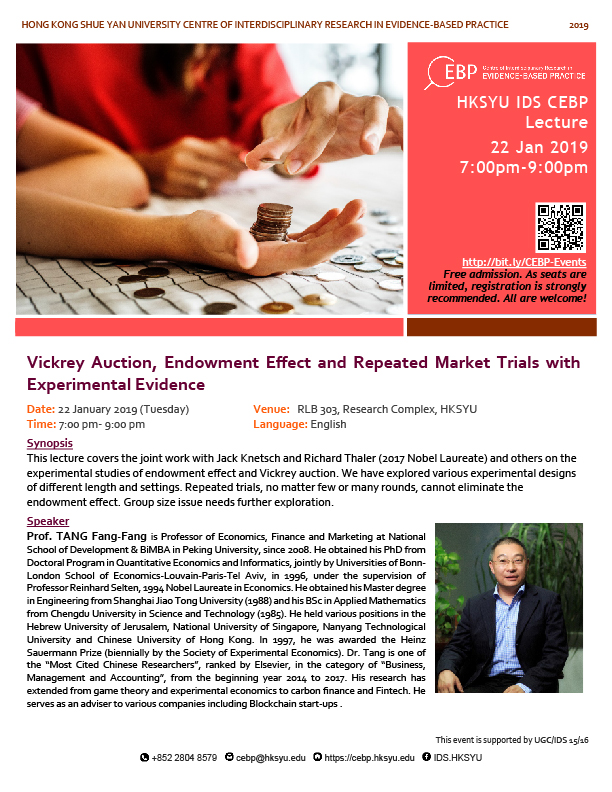